Thanks to Graham Collins for these pictures of the Edson wheel steering installed 2 or 3 years after his Aloha 27 (8.2) was built.

This was also available as a factory option, and looks a fairly straightforward retro-fit. Edson have details of and can supply the parts needed to fit wheel steering to Aloha 27 or Aloha 28 (see A28 Wheel Steering Conversion) models.

I was having trouble with my engine quitting on me after several hours of operation in rough seas – the exact time you don’t want to have to think about engine failure. This first happened to me while crossing from Wilson to Toronto on a rough afternoon, taking 20 knot winds over the bow. I was running fine for about 3 hours and then came the dreaded RPM drop we all hate to hear. I thought it would be my primary fuel filter and would make a quick change underway and be done with it. That was not the case. I removed the filter to find it was quite clean. I was finally able to make it to Ashbridges Bay and was towed in by a fellow yacht club member. After enjoying the evening there I was able to start the engine and run it for 6 hours back to Wilson on a calm afternoon day. My thinking is this: When the fuel in the tank becomes disturbed or unsettled the intake from the fuel tank must become clogged. I am guessing that the clog would occur where the fuel intake line makes the 90 degree turn to be pumped to the electric fuel pump. It becomes narrow there and after settling down for a couple of hours it must clear itself.

Removing the fuel was quite easy. I only had half a tank to begin with and I used my oil changing pump to remove all 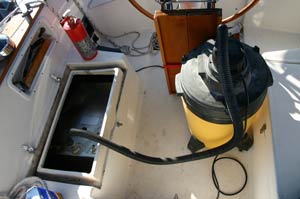 the fuel. Just as I suspected there was large hunks of “stuff” floating in the tank. There was not a lot of gunk adhered to the walls of the tank, but rather this free floating debris. I also noted in the 90 degree angle from  the tank to the electric fuel pump that the ball valve was full of debris. I also pulled out a piece of silicon that was used during installation that was caught in this position.

Once the tank dried out I placed my shop vac on blow and stuck the hose in the inlet. I was afraid of fumes while I was cutting. So as a precaution I ran the blower on my shop vac while I was cutting. I cut a 6″ hole in the top of the tank and this allowed me to reach in and wipe the tank clean with acetone. I used a small amount on a rag just to pick up loose debris that was not siphoned out. I also was very thorough to ensure I did not leave any metal shavings from my jigsaw in the tank. It worked quite well.

After cleaning I secured the flange with the rubber gasket (it’s not actually rubber, but I had a hard time finding something that could handle contact with diesel fuel. If anyone needs any of this material let me know. I had to by a square yard and only used and 8″ square piece.) I secured it to the tank by using self-tapping sheet meal screws. I pre-screwed the holes so I was able to clean up any metal shavings before my access was gone.

The true test will come when I have the tank filled and heel the boat over to check for leaks. I feel confident that the gasket material and the dozen screws will provide the necessary and appropriate seal, although I will certainly verify it visually.

I wanted to have my fuel tank steam cleaned. My original plan was was to simply remove the tank through the sail locker, but the opening was about 3/4″ to narrow.  The “traditional” design Aloha 32’s do not have this locker and I have no idea how I would have done this job in that situation. I believe the only way to get to the fuel tank on the other designs is to remove the engine. I plan on doing this job on CELEBRATION (A32 – #58).

I have been working on replacing my prop shaft after I bent it by wrapping a sheet around it on the very last sail of the season last year. Actually, I am embarrassed to say it wasn’t even a sheet but rather a dock line because I was lazy and was sailing alone. When I sail alone I will often take my spring line with me so when I come in to my slip I can get off the boat with the spring line in hand. Well, while I was sailing and the engine was off, the line wrapped and needless to say I could not get the engine in gear. I had a “great” idea to try to put it in reverse to see if I could unwrap the line – forget about it. I did not think I would have done as much damage as I did because the shaft was not turning and suddenly come to a complete halt as the line jammed. I was wrong. There was enough torque to cause the 1″ shaft to bend ever so slightly and make my engine wobble and vibrate. So I thought it would be a good idea to remove and replace the shaft and cutlass bearing on board Valkyrie. I learned quite a bit and thought I would pass on some of my thoughts to those who may have to do the same thing some day.

My original thought was I would have to drop the rudder in order to get the shaft out. I was dreading that job and thought it would be much easier to pull the shaft into the boat. Obviously, a much better and easier way to complete the mission. 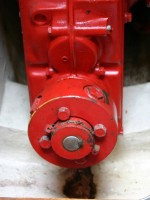 I loosened the stuffing box nut and simply pulled the shaft into the boat, after of course the prop was removed which I needed a prop puller to accomplish. 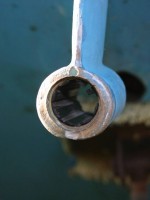 I had researched how to get the cutlass bearing out and was told to press it out using a threaded rod with bolts and washers. I opted to cut it with a hack saw blade. It took about a half hour and I was very careful not to cut into the strut. Once I had a cut in the bearing it was easy to tap out. Remember there are two set screws (not shown) holding the bearing in place. The replacement bearing I needed was called the “blackfish” and was ordered through West Marine at a cost of about $45.00 (US). I did not realize, until I had the new bearing in my hand, how worn the old one was. The wear was significant.

I then had my shaft duplicated at the local machine shop at a cost of about US$250.00. I replaced the anode and repacked the stuffing box using Teflon packing. 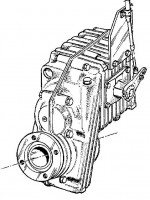 Now the tough part – Aligning the engine with the prop shaft. The shaft was reinstalled and the prop was secured. Without attaching the coupler I could see the prop shaft did not align perfectly to the center of the transmission opening where the coupler attaches. When I installed the shaft to the coupler and the coupler to the transmission the shaft had an elliptical motion. This motion caused undue wear and stress, especially to the stuffing box. It also added unwanted vibration. I spent two days tweaking the engine mounts to MOVE THE ENGINE TO MEET THE SHAFT. I still have an extremely minor “wobble” that I can’t get rid of. I felt that this is the best I could do, and compared to other engines I looked at, mine was “true” enough. The most important thing I learned; the four bolts on the outside circumference of the large coupler ARE NOT ADJUSTMENT BOLTS. They are simply bolts attaching the two round couplers together with rubber bushings to dampen vibration. I had someone else look at the elliptical pattern I could not get rid of and they adjusted these bolts, only later to discover they are not to be touched. Bottom line, I had to go to my machinist again to have the unit put back together because I could not get all the bushings back in line. That cost me a day! One more point. I was checking my transmission fluid level and discovered my dip stick, which should be attached to the filler cap as one unit, separated and the metal dip stick fell into the transmission! Fortunately I was able to get it out, but I lucky to find it before it was ground into the gears and cause major problems with the transmission. Oh, by the way, replacement cost is (I hope you’re sitting down) $112.00 (US). I decided to either epoxy or solder mine back together! This is a brief overview and I could go into more detail, however I think it gives pretty good idea of the project. 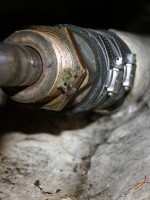